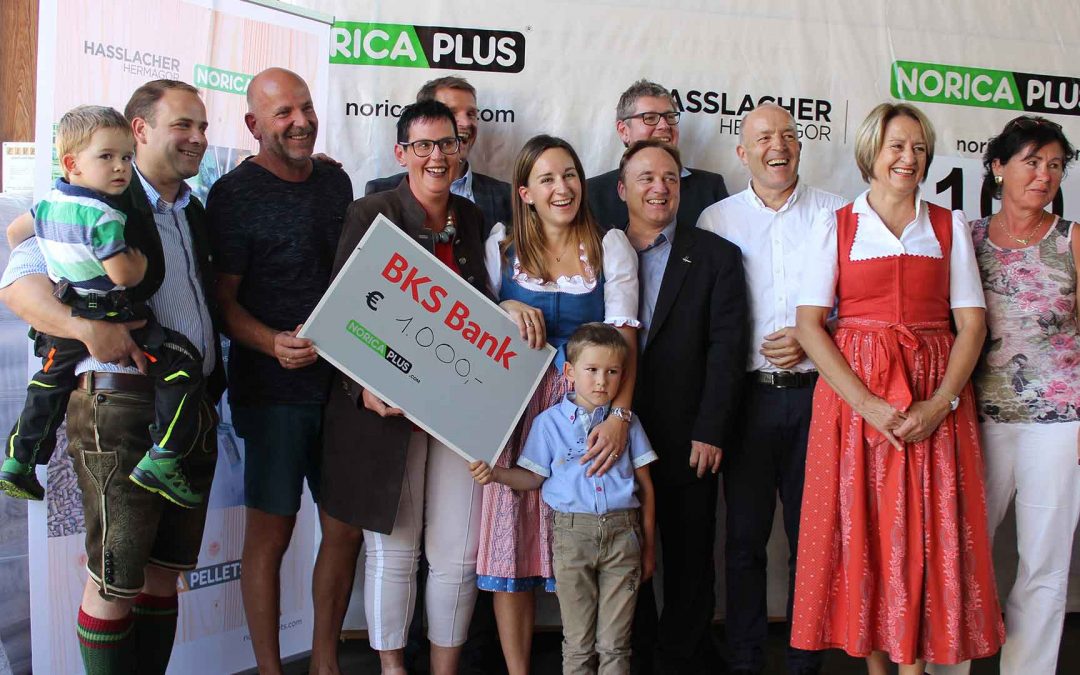 The hour of birth of today’s HASSLACHER HERMAGOR GmbH was the 21stof September 1918. Exactly 100 years later the jubilee of the family-owned and highly traditional company was celebrated on the company’s premises in Hermagor together with the employees. From now on the company is looking optimistically into the future.

On Friday, the 21stof September, HASSLACHER HERMAGOR GmbH celebrated their 100thanniversary. The foundation of the former “Brothers Hasslacher & Co” was established by Jakob and Franz Hasslacher as well as Franz Pirker. While the first custom cuts were executed in two little saw mills, their first own saw mill was established in 1920 at the present-day location. There was no separate office at the time. The mills were administered from a rented room in the “Gasthof Frenzl” (Emperor of Austria). Nowadays, the company employs 75 people and thus ranks as one of the most important employers in the region.

“Our employees are our most valuable asset”, Johanna Honsig-Erlenburg sums up. “That is why we decided upon a small celebration together with our employees as our success is shaped significantly by our employees – then and now.” During the celebration with the staff, which was also attended by Hermagor’s mayor Siegfried Ronacher, the sales management presented a cheque of 1000 EUR to the organisation “ÖZIV-Lebenswerke Hermagor – For people with disabilities”. At the presentation the organisation’s head Birgit de Cillia-Messner reported that the money will be used to buy handicapped accessible sports equipment. Furthermore, the staff of HASSLACHER HERMAGOR received new workwear on the occasion of the company’s anniversary.

The HASSLACHER HERMAGOR GmbH is led as a family business by the third (DI Leopold and Mag. Maria Schnaubelt) and fourth (DI Johanna and DI Markus Honsig-Erlenburg) generation now. The general managers Jürgen Winkler and Dr. Heimo Schader are actively working in the business management since December 2017. Approximately 200.000 cubic metres of timber are purchased mainly locally each year, of which the main part is directly processed into sawn timber for constructive timber work. Moreover, the company provides profiled wood, planed timber, beams and packaging timber. Next to the saw and planing mill at the corporate site in Hermagor there is a timber market as well as the pellet manufacturing plant “NORICA PELLETS” producing about 25.000 tons of pellets per year. Additionally, HASSLACHER HERMAGOR operates two electric power plants and a photovoltaic system in cooperation with a partner. Santners Erben KG in Weißbriach is producing sawn timber custom cuts from strong timber for the mill in Hermagor.

Since 2016 the timber industry is experiencing an updraft. The demand for sawn timber which can be used for products like glued laminated timber and cross laminated timber is enormous. “The future will show if we can establish the company as supplier or if we are to invest into further processing, potentially cooperating with a colleague in the industry at the corporate site in Hermagor.”, general managers Jürgen Winkler and Dr. Heimo Schader report.